This guide gives you an overview of what you need to know about diabetes. Our other guides can teach you more about the symptoms of diabetes, as well as provide specific information about type 2 diabetes and type 1 diabetes.

Many people with diabetes or prediabetes have improved their health with dietary changes. You can too! Making these changes may allow you to reduce or eliminate diabetes medication, and help you lose weight as well.

Simply put, diabetes is a disorder of blood sugar (glucose) and insulin.  In diabetes, something is wrong with the way a person makes and/or uses insulin, a pancreatic hormone that lowers blood sugar by moving it out of the bloodstream and into the body’s cells.

Type 1 diabetes results when, for autoimmune or other rare reasons, the pancreas becomes damaged and fails to produce insulin. This form of diabetes is most often diagnosed in childhood but can occur in adults.

Excess glucose in the blood is a problem because it can damage blood vessels. What’s more, the body’s tissues can’t effectively use glucose for energy because too much of it stays in the bloodstream instead of entering the cells.

It is important to recognize that high glucose levels are a consequence of an underlying process that has been going on for years before blood sugar becomes high. To explain: early on the road to developing high blood sugar and getting diagnosed with type 2 diabetes, an insulin-resistant person usually has too much insulin in the blood. This is due to the pancreas reacting to the death and/or dysfunction of its insulin-producing beta cells.

Essentially, the pancreas realizes that it has two problems: its overall ability to make insulin is getting worse, and the insulin that it is able to make isn’t working very well. So, the pancreas cranks out more insulin to flood the body’s insulin receptors and overcome the resistance. This works to keep blood sugars normal, until so much beta cell function is lost that the pancreas can no longer crank out excess insulin

Other than its implications for blood glucose and progression of type 2 diabetes, why is it bad to have high insulin levels?

The good news is that diet and exercise can help decrease insulin resistance and its associated weight gain, which may help prevent or even reverse diabetes.

Our guide on what you need to know about blood sugar can help you learn more about both high and low blood sugar. This guide focuses specifically on the high blood sugar levels that occur in diabetes.

How do you know if you have too much sugar in your blood? If you don’t know already, it’s simple to test in a few seconds, either in your doctor’s office or with your own inexpensive blood glucose meter.

Compare your own blood sugar reading with the ranges below:

If you are already on a low-carbohydrate diet and you are concerned about the measurements you’re getting, find out how a low-carb diet affects blood sugar measurements.

People with diabetes have difficulty keeping blood sugar levels in a normal range. The blood turns “too sweet” as glucose levels rise.

Sugar in your blood comes from two places: your liver and the food that you eat. You can’t do much to control the amount of sugar your liver makes, but you can control the foods you eat.

Foods that turn into glucose when they are digested are called carbohydrates, or carbs. When glucose enters the bloodstream, it’s called blood glucose, or blood sugar.

The more carbohydrate eaten in a meal, the more sugar is absorbed into the bloodstream and the higher the blood sugar will be.

Although very few people would agree that sugary foods are good for you, some foods that we think of as “healthy” — such as fruit — actually have a lot of sugar. And many people don’t know that starchy foods — such as bread, rice, pasta, and potatoes — quickly turn to sugar when you digest them.

Eating a potato could raise blood sugar as much as eating 9 teaspoons of sugar! However, it can be hard to predict exactly how someone’s blood sugar will respond, as this will likely vary based on genetics and baseline insulin sensitivity. 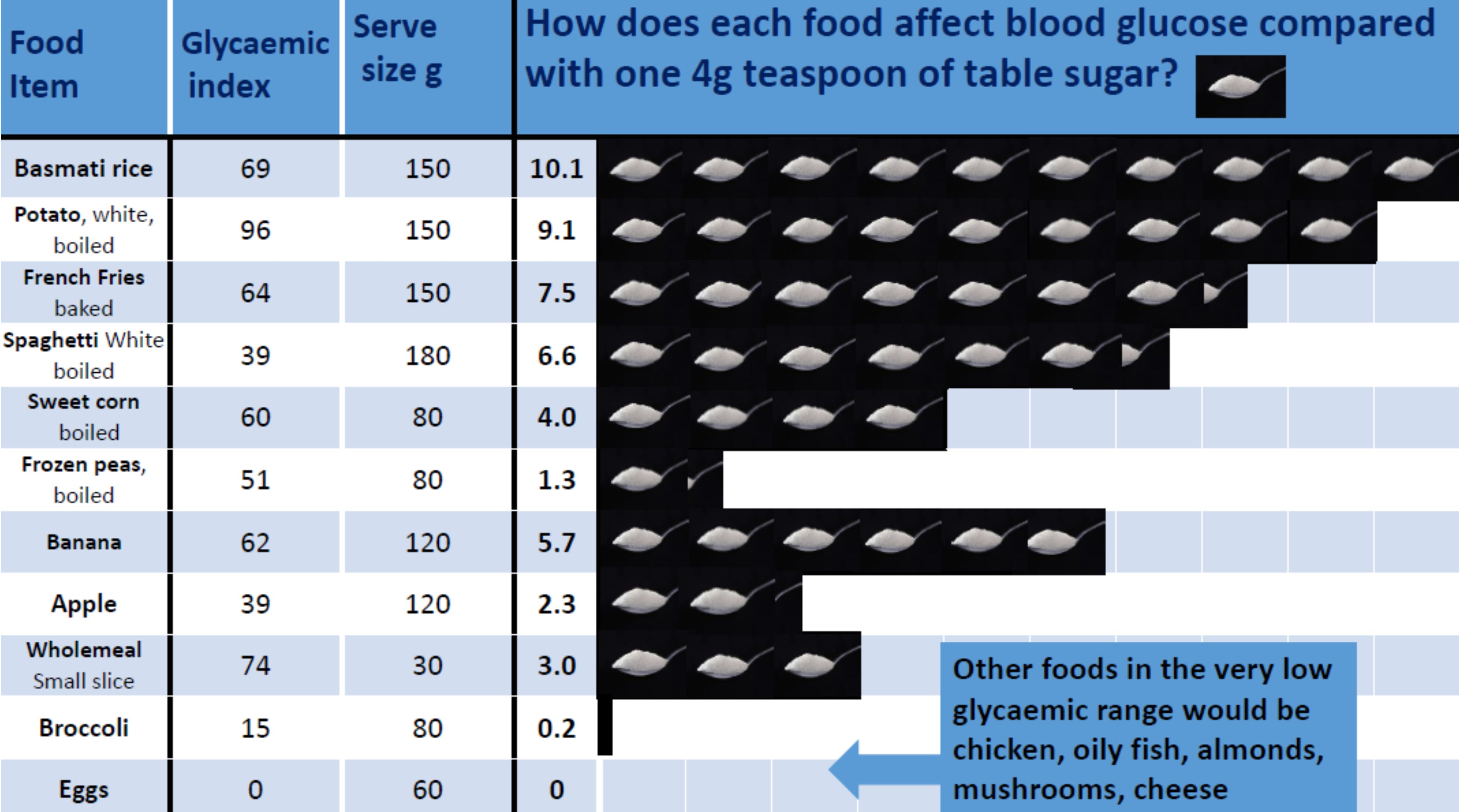 Protein containing foods include eggs, poultry, meat, seafood and tofu. Although individuals have different responses to these foods, consuming moderate amounts of protein at a meal generally has little effect on blood sugar.

Dietary fat has very little effect on blood sugar. However, we seldom eat fat all by itself. Some foods, like cheese, are made up of mostly protein and fat. These foods probably won’t raise your blood sugar very much.

But other foods, like doughnuts and French fries, are made up mostly of carbohydrate and fat. Because they’re high in carbs, these foods are likely to significantly raise your blood sugar.

4. How to lower blood sugar with diet

What happens if you remove foods that raise your blood sugar from your diet? Is there anything good left to eat? We think so. In fact, we have a whole guide on the best foods to control diabetes.

But a picture is worth a thousand words. These are just a few of the delicious foods that don’t raise blood sugar: 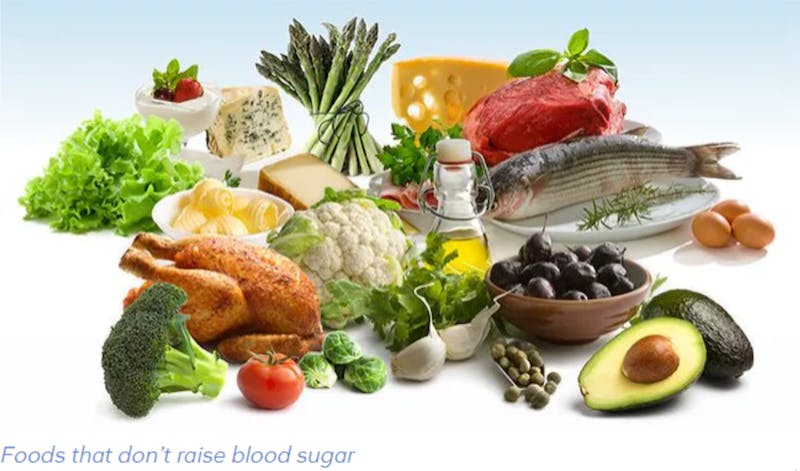 Many people with type 2 diabetes are now choosing a diet based primarily on low-carb foods, and many clinicians are catching on as well.

Choosing foods low in carbs is an effective way to help you control your blood sugar and is safe for most people. However, if you are taking medications for your diabetes, you must work with your healthcare provider to adjust your medications when you change your diet since the need for medications, especially insulin, may be greatly reduced.

If you are looking for a doctor who will work with you to control your diabetes with a change in diet, our map may help you find one.

5. The science of diabetes reversal

In 2019, the American Diabetes Association (ADA) stated that reducing carbohydrate intake was the most effective nutritional strategy for improving blood sugar control in those with diabetes.

Research shows that low-carb diets are a safe and effective option for treating type 2 diabetes. This body of evidence includes systematic reviews and meta-analyses of randomized controlled trials (the highest quality of evidence by our ratings.).

A meta-analysis from 2017 found that low-carb diets reduced the need for diabetes medication and also improved certain bio-markers in people with type 2 diabetes. This included reductions in hemoglobin A1c (HbA1c), triglycerides, and blood pressure; and increases in high-density lipoprotein (HDL) cholesterol, sometimes called the “good” cholesterol.

Additionally, in a non-randomized trial from Virta Health, the intervention group of subjects with type 2 diabetes followed a very low-carb diet and received remote monitoring by physicians and health coaches. After one year, 94% of those in the low-carb group had reduced or stopped their insulin use. Furthermore, 25% had an HgbA1c in the normal range without needing any medications, suggesting their disease was in remission, and an additional 35% did the same with only metformin. At the two-year mark, a high proportion of subjects continued to demonstrate sustained improvements in glycemic control.

This evidence suggests that type 2 diabetes does not have to be a progressive and irreversible disease. It is clearly a treatable disease when an effective lifestyle intervention is used.

6. A message of hope

As recently as 50 years ago, type 2 diabetes was extremely rare. Now, around the world, the number of people with diabetes is increasing incredibly rapidly and is heading towards 500 million. This is a worldwide epidemic.

In the past, type 2 diabetes was thought to be a progressive disease with no hope for reversal or remission. People were — and sometimes still are — taught to “manage” type 2 diabetes, rather than to try to reverse the underlying process.

But now people with type 2 diabetes can hope to regain their health! Today we know that the hallmarks of type 2 diabetes — high blood sugar and high insulin — can often be reversed with a very low-carb diet.

People don’t just have to “manage” their diabetes as it progresses. Instead, they can often lower their blood sugar to normal levels with diet alone, and may be able to avoid or discontinue most medications.

Normal blood sugar levels and fewer or no medications likely means no progression of disease, and no progression of complications. People with a diagnosis of type 2 diabetes may be able to live long, healthy lives, with toes, eyesight, and kidneys intact!

If you are not on any medications, you can start your journey back to health today. If you are on medications for diabetes or for other conditions, consult your doctor before beginning any lifestyle change, such as a low-carb diet, so your medications are adjusted safely as your blood sugars improve.

When you’re ready, here’s where to start: A low-carbohydrate diet for beginners. During your own journey, you might be inspired by some spectacular diabetes success stories.